The Coast of Scarlino 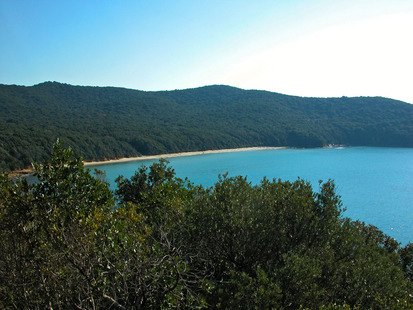 The protected area of the Scarlino Coast encompasses rocky bays of rare beauty set like gems in the monumental green of the Mediterranean scrub. The most famous among them are Cala Martina, known for the passage of Garibaldi before the Italian unification, and other sandy bays such as Cala Violina, one of the most beautiful bays in Italy, whose name “Violina” (violin) derives from the sound produced when walking over the sand, and Cala Civetta, near the mouth of the Alma river and dominated by the coastal tower bearing the same name.
You can access the beach only by foot, on horse or by bike, following the paths starting from Portiglioni (loc. Terra Rossa) or from Pian d’Alma (loc. Val Martina).
Services: walking and cycling trails for mountain bikes (steep slopes), picnic areas, spots to reach the sea, first aid service (only in Cala Violina during the months of July and August). In the area loc. Val Martina there is also a guarded parking with parking fees during the summer.