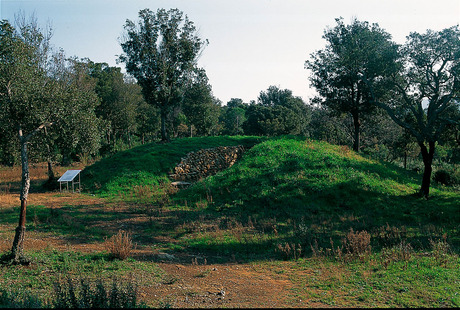 The Etruscan necropolis, today surrounded by the thick woodland of the Mediterranean scrub, is located on the western slopes of Poggio Tondo. Originally, the necropolis could be seen from afar thanks to the conic shape of the tumuli, the mounds of earth and stones culminating in a stone cippus.
The archaeological area includes 4 tombs dating back to the VII and VI century BC and the ruins of an Etruscan farm of the VI century.
Even though the tombs have been profaned, some of the grave goods have been preserved: ceramic vases and, less frequently, bronze vases, manufactured in the local area (Vetulonia) or imported, and perfume containers.
The area can be reached from the village Pian D’Alma, on the provincial road S.P. 158, which leads from Puntone to Castiglione della Pescaia.
Services:  explanatory panels for the following sites:
Tomba del tamburo (tomb of the tambour)
Tomba del Carro (tomb of the cart)
Tomba del Cippo ( tomb of the cippus)
Tomba delle Due Porte (tomb of the two doors)
The Etruscan farm