In Vetulonia an exhibition on the first ever documented naval battle, Alalìa 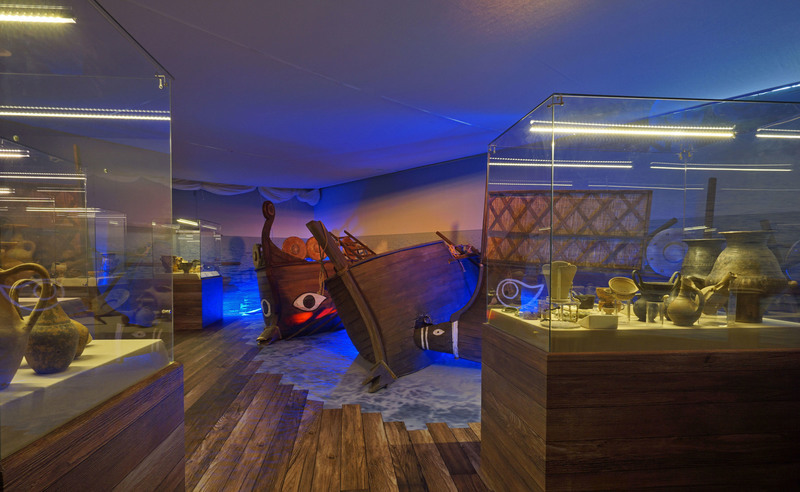 
At the Archaeological Civic Museum Isidoro Falchi of Vetulonia until November 3 you can visit the exhibition "Alalìa, the battle that changed history: Etruscans, Greeks and Carthaginians in the Mediterranean of the sixth century BC". An exhibition that through scenographic reconstructions, videos and over 150 exhibits of extraordinary scientific and artistic value, tells the genesis and the consequences of what was the first naval battle ever documented and that took place around 540 BC in the sea off the coast of Corsica between an Etruscan Carthaginian coalition and the fleet of Greek refugees from Phocaea. The finds are the result of loans mainly from the Aleria Museum, partner of the exhibition, then from the Antiquarium Arborense of Oristano, Superintendence of Archeology, Fine Arts and Landscape of Sassari and Nuoro, National Archaeological Museum of Florence, National Etruscan Museum of Villa Giulia of Rome and finally a selection of finds seized by the Nucleus Protection of the Archaeological Heritage of the Guardia di Finanza in Rome. Amphoras, weapons, sacred objects and artifacts are the protagonists of a story that unfolds behind the scenes of a scenario that represents the Mediterranean in the Archaic period, in the time that precedes it and follows the naval battle that according to the Greek historian Herodotus will end without winners or defeated, but that very concretely will sanction the division of the Tyrrhenian islands among the maritime powers that dominated the routes and commercial traffic in this well-defined sea corner, assigning Corsica to the Etruscans, Sardinia to the Phoenicians of Carthage and Sicily together with the South Italy to the Greeks.

Among the exhibits, an extraordinary attic dinos from the Castellani Collection (loan from the National Etruscan Museum of Villa Giulia, in Rome) stands out. In the portion of the frieze preserved on the circular rim of the vase, the ceramograph's signature is still clearly visible, which assigns this finding unequivocally to the famous hand of Exechias (all over the world there are only 10 ceramics with this signature), while inside the those pentecontes (warships with 50 rowers) are designed with a line of very high quality, above the pace of the undulating sea, where the hopes and fates of the major naval powers of the Mediterranean were placed. The exhibition was organized by: Municipality of Castiglione della Pescaia, Civic Archaeological Museum Isidoro Falchi, Community of Corsica in collaboration with Banca Tema, Museums of Maremma, Just Castiglione della Pescaia, coordinated by the scientific director of the Simona Rafanelli museum in collaboration with the leader of the project, Professor Vincent Jolivet and with the scientific and logistic referents of the "Collective Research Project" of Corsica. The exhibition will be open until 3 November 2019 every day except Mondays from 10 am to 6 pm in the Archaeological Civic Museum of Vetulonia, Piazza Vetluna. Ticket price 5 euros, 2.5 reduced. Info: you. 0564948058, www.museoisidorofalchi.it The exhibition will be itinerant and after Vetulonia the other two stages will be in 2020 in Aleria, in Corsica and the following year in Carthage, in Tunisia.